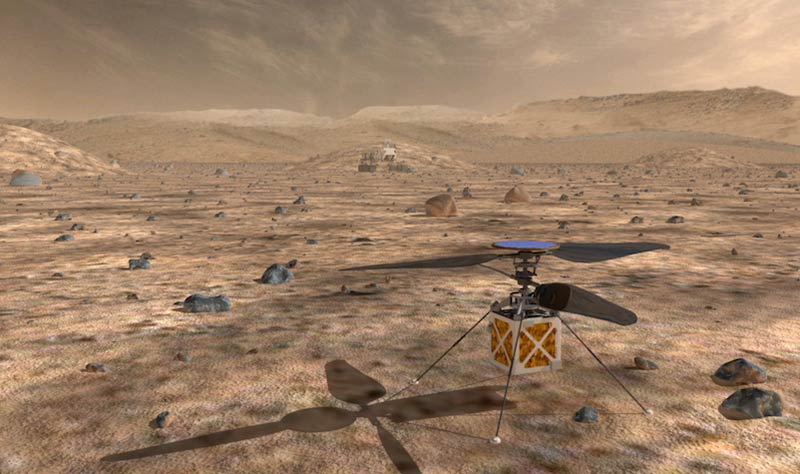 AeroVironment declared recently at a briefing in New York City that it will play a critical part in building the drone helicopter recently selected by NASA’s Jet Propulsion Laboratory (JPL) Mars Exploration Program.

AeroVironment a global leader in unmanned aircraft systems and tactical missile systems, is synonymous with creating diverse innovations for nearly half a century; innovations which have redefined driving and flying in the world. AeroVironment displayed a model of the Mars Helicopter, which is planned to be flown on Mars in less than three years.

“AeroVironment’s deep, rich and diverse history of innovation combined with our experience with near-space aircraft like Pathfinder and Helios make us uniquely suited to collaborate with NASA and JPL on this historic, interplanetary venture,” said AeroVironment President and Chief Executive Officer Wahid Nawabi.

AeroVironment used airfoil design principles and simulation tools that replicated flying conditions at nearly 100,000 feet above the Earth to simulate air density conditions similar to the surface of Mars.

The first stage of the project comprised the development of subscale Mars helicopter prototypes by AeroVironment to test and demonstrate the feasibility of lift in the thin Martian atmosphere.

Thereafter in May 2016, a Mars Helicopter rotor and landing gear prototype integrated with a JPL-developed controller was created by AeroVironment which demonstrated free flight in a simulated Mars atmosphere proving that it is possible to fly on the Red Planet. It was then delivered to NASA/JPL.

While one of the models was used for flight demonstration in JPL’s large 25-foot space simulator; the other was used for environmental testing which included not just thermal tests to ensure the vehicle could endure the frigid Mars nights, but vibration tests also to ensure the model’s ruggedness to be able to withstand the launch. Both vehicles passed the rigorous tests, paving the way for the development and fabrication of the final, Mars-bound version.

The AeroVironment team has been working in close collaboration with NASA rotorcraft experts at the NASA Ames and Langley research centres along with JPL electrical, mechanical, materials, vehicle flight controls, and systems engineers. AeroVironment’s contributions to the first Mars drone include design and development of the helicopter’s airframe and major subsystems, including its rotor, rotor blades, hub and control mechanism hardware.

AeroVironment is building the flight versions of their subsystems to be integrated with other subsystems to complete the vehicle that JPL is building. JPL will install the finished Mars Helicopter into the Mars 2020 rover for its ride to a Martian landing site.