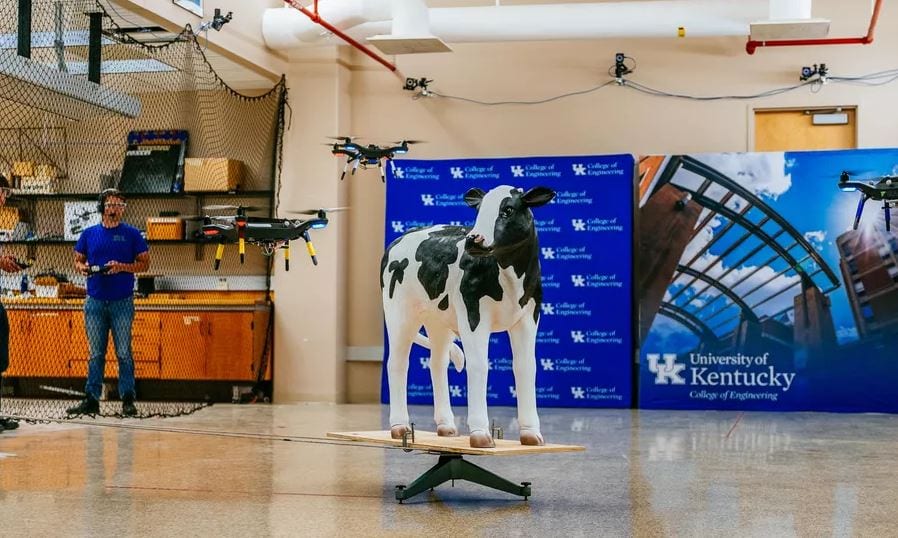 Researchers at the University of Kentucky are developing an autonomous drone system to monitor cattle health in pasture. The drones will capture indicators like heart rate, body temperature and weight. Tyler Lizenby/CNET
4.1
(9)

It looks like drones might just become a farmer’s new best friend if an article by Molly Price at CNET is to believed. Automated drones that can monitor cattle health in the pasture are being developed by a team of professors and student researchers at the University of Kentucky (UK). The motivation for the project came from statistics thrown up by the to the team’s research- 2.5 million US cattle die every year from health issues, accounting for 60% of the cattle losses.

According to the North American Meat Institute, beef exports reached a record $7.27 billion in 2017, a year when the USDA reports American meat companies produced 26.3 billion pounds of beef. The type of cattle the team is hoping to monitor is cattle in beef production, a major industry across the U.S. and a significant export.

Given that bovine graze for extended periods of time out in the field, it’s difficult for farmers to check each one’s wellness on a regular basis. The drones or unmanned air vehicles (UAVs) come in handy by providing farmers with a way to remotely and autonomously check on the location and health of each cow, allowing them address cattle health and safety issues much sooner.

A new system aims to identify each cow, locate it in a pasture and measure vital health information like weight, size, facial features and physical activity.  The autonomous UAV system in development at UK could potentially locate, recognize and monitor each cow. The project, funded under a grant from the USDA, began in February 2018 and is slated to continue through February 2021.

Zack Lippay is the Ph.D. student leading these drone test flights says, “We’re trying to prove that this method is safe before we take it outside and work with real cattle. Everything is completely autonomous, but we have a fail-safe where pilots can take over if things get a little unstable.”

The drones being used are 3DR Solo drones modified with Raspberry Pi, a small low-cost computer board, and a dongle that adds wireless connectivity so they can communicate with each other. A software program the team has customized tells the drones when to execute maneuvers for takeoff, hover, home and land.

The Bovine pose for the camera

Completing the automated drone flight is just the first step in the cow-monitoring procedure. The real challenge is teaching the drones to identify one cow from the other. Machine learning and facial recognition software play a crucial role here. The team needs to train the software to recognize the size; shape and colors of a cow and then it will need to learn each cow’s face specifically. To do this, 3D models will have to be constructed using real images of cows.

Michael Sama, associate professor of biosystems and agricultural engineering, and Ruigang Yang, professor of computer science, are leading this part of the project. They would be collecting the right dataset of images to teach the software what a cow should look like. In order to capture a 360-degree image of a cow the team has built what amounts to a cow photo booth. It’s a standard cattle pen, but covered with 40 cameras evenly spaced around it. A cow would be led into the pen, and each camera would simultaneously capture an image, creating a set of photos from 40+ angles to create a 3D cow model which the software could then use to learn what to look for in the field. The photo booth hasn’t been tested with real cows yet, but with fast working cameras, the team estimates it could capture 360-degree images of up to 50 cows per day.

Can drone flying cause stress?

The team also needs to ensure there won’t be any adverse effects or stresses caused by drone flying on the cattle. If the drones raise the cows’ heart rates, that data won’t give an accurate picture of the cow’s everyday health.

Trials have already begun to test how the cows react to the drone flights. The team flies drones on the university’s Animal Research Center, a farm in nearby Versailles, Kentucky, which houses real cattle as a part of the beef production research center. Josh Jackson, Assistant Extension Professor of Biosystems and Agricultural Engineering, who is the resident expert in handling livestock and monitoring vitals leads will head this part of the project.

The current health monitoring the team is using to gather information on the herd is a cow-sized heart rate monitoring strap, much like what a human athlete uses in training. Each heart-rate monitor and GPS locator are connected to the cow’s personal email and mobile device. These cows have a phone each and e-mail is numbered to match the cow it’s monitoring, and the cow carries all those devices in a special collar. Josh says systems like these are expensive and difficult to manage. A team of drones could do better.

The team needs to be sure that the herd can tolerate drones flying around them. For three days a week, the team performs five, 5-10 minute test flights per day, giving the cattle four days of rest. Jesse Hoagg, Donald and Gertrude Lester Professor of Mechanical Engineering and lead researcher on the project says, “One of the key things about using UAVs around animals for health monitoring is we have to understand how close we can get to them and how we can maneuver around them in order to prevent any adverse effects.”

So far the heart rates among the herds circled by drones don’t increase or show signs of stress.

Speaking about the significance of UK’s USDA-funded project, Dr. Steven Thomson, a National Program Leader with the USDA National Institute of Food and Agriculture says, “This effort is one of the first to rapidly monitor the health of a livestock herd,” said Thomson. “Unmanned aerial imaging systems have the benefit of monitoring large areas of livestock, much like they already do for monitoring crop health. This practice is a cost-effective way to monitor key livestock health indicators using sensors and imaging.”

Though this autonomous drone project is still years from being completed, but when it is, it will be a proof of concept for improving efficiency on the farm and lightening the physical work of small-herd farmers.

“The hope is that someday the technology we’re developing in this project could actually be commercialized and used by small-herd cattle producers in the state of Kentucky, the United States in general and possibly across the world,” said Hoagg.