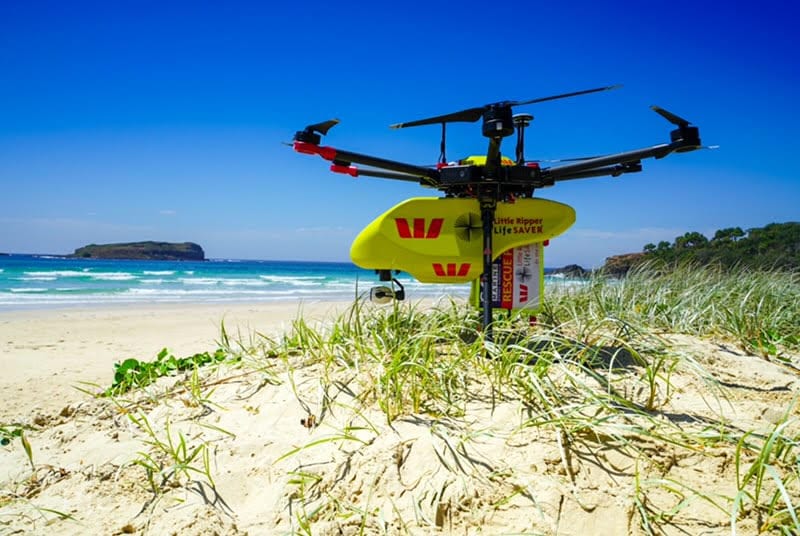 Artificial intelligence is allowing drones to spot and assist swimmers in distress. Ripper Group, an Australian drone services company, has announced it is adding world first autonomous capabilities to the drones used by the Westpac Rescue Helicopter program.

“Little Ripper” drones are already in use on Australian beaches and have successfully assisted several live rescues. The flying drones can help spot and monitor swimmers as well as drop life saving devices. Till date the drones needed a human pilot to remotely control the device from the shore and spot swimmers.

New “Smart Artificial Intelligence” developed in conjunction with the University of Technology Sydney, uses an AI system that was originally designed to detect sharks in real-time. Unveiled by the company today at the Amazon Web Services Public Sector Summit in Canberra means Ripper Group drones can now also operate and identify swimmers autonomously.

Speaking at the Amazon Web Services (AWS) Public Sector Summit in Canberra on Wednesday, Dr. Scully-Power said the drone technology can differentiate up to 16 different types of marine life. The technology also features an in-built siren and speaker system and can also deploy flotation pods during emergency rescues to support up to four people.

In addition, Scully-Power announced that the AWS cloud has been able to reduce latency of its video feeds from its drones from 10 seconds to 1 second, resulting in the launch of The Little Ripper live stream management app to allow life savers to view live video feeds from their Smartphones. This mobile app also released today, lets rescuers access video feeds from the drones when they detect a swimmer in distress using AI.

“To spot someone in distress, with artificial intelligence you can do much better than a human,” Scully Power told Which-50. “So that makes it totally unique.”

Training the software to spot sharks, including distinguishing them from whales, dolphins and crocodiles, allows long term monitoring – currently in use – helped build the foundations for identifying swimmers in distress.

“There are certain signs you can pick up,” Scully-Power explained. “Like splashing around too much, [swimmers] waving their arm. You teach the artificial intelligence if they do a series of things like this then they are probably in distress.”

The software uses cloud computing for what Scully-Power calls “command and control”. Scully-Power further adds, “Right now, while we are developing, all the video goes in to AWS and we have artificial intelligence looking over all that. The next step beyond that is having what I call ‘Smart Artificial Intelligence’: it will only transmit to the cloud incidents that we need to respond to.”

Looking ahead, Little Ripper Group plans to deploy long-range drones to monitor unpatrolled beaches in Australia, with the first ones expected to fly between Sydney and Newcastle.

Scully-Power said such drone technology has the potential to also be applied for a range of other use cases including transport, infrastructure, and even border protection.